Department of Internal Diseases of Animals, Faculty of Veterinary Medicine and Biotechnology

1. Mission and history of the department

The mission of the department – is the training of highly qualified personnel in the specialty 610001 – «Veterinary».

With the establishment of the Veterinary Institute in 1933, in 1935 one of the departments of non-contagious pathology and animal therapy was organized.

The first head of the department was associate professor (docent) Ivan Konstantinovich Erkovich. He worked in this position until 1937. From 1937 to 1945, the department was headed by associate professor (docent) Vasily Fedorovich Paviov, a student of the greatest therapist A.R. Efgrafov, from 1945 to 1947 acted as head of the department military veterinarian, lieutenant colonel A.Ya. Yakhnitsky. After the Great Patriotic War, from 1947 to 1955 an Academician of the AN Kyrgyz Republic, Doctor of Veterinary Sciences, laureate of the USSR State Prizes Anna Alexandrovna Volkova, headed the department.

In 1976, he was elected by competition as the head of the joint department of therapy, clinical diagnostics of pathophysiology, a well-known pottomorphologist, honored veterinarian of the Kyrgyz Republic, doctor of veterinary sciences professor Ivan Seliverstovich Egoshin. A graduate of the Leningrad school of pathologists, a student of the famous pathologist, Professor P.I. Kokurichev. More than 10 Ph.D. dissertations have been defended under his scientific supervision. ( Yu.K. Shegrin, T.A. Peregudov, K.I. Isakov, E.V. Vidomsky, A.V. Buynov, D.R. Raimbekov, S.D. Tulegenov, M.D. Nogoibaev, A.Z. Tulobaev, M.K. Musakunov, and otherc).

The department of pharmacology was organized in 1936 by associate professor and then professor Georgy Stratonovich Nazarov, a student of the founder of soviet veterinary pharmacology and toxicology, Professor Nikolai Aleksandrovich Soshestvensky.

After the leaving G.S. Nazarov for nine years from 1938 to 1947 was in charge of the department, associate professor Evgeny Karlovich Ekman. Then, from 1947 to 1953, associate professor, later professor Mikhail Nikiforovich Milovanov, headed the united department of pharmacology, pathophysiology and biochemistry. He is a student of the Kazan pharmacologist, Professor P.I Popov.

From 1953 to 1974, the department of pharmacology, pathophysiology and biochemistry was headed by the honorary academician of the national academy of sciences of the Kyrgyz Republic. Honored worker of science Kyrgyz Republic, doctor of veterinary sciences, Professor Abdulkhay Aldashevich Aldashev. He is a student of a prominent soviet veterinary pharmacologist, academician of the All-Union Academy of Agricultural Sciences named after Lenin, Professor Ivan Efimovich  Mozgov. Under the guidance of Professor A.A. Aldashev defended candidate dissertations A.O. Osmonov, M.P. Tribunsky, M. Arzybaev.

In 1993 the department  was renamed as the department of internal diseases of animals, the head of department was elected doctor of veterinary sciences, professor, academician of the RAVN and MAVN Mukanbet Daiyrovich Nogoibaiev, who is the head of department to the present. He is student of the famous pathomorphologist, Professor I.S Egoshin and a major clinician-therapist, author of a textbook for universities, «Internal non-communicable diseases of agricultural animals» doctor of veterinary sciences, Honored worker science of Russia, Professor Boris Mikhailovich Anokhin.

The department prepares students with the profile “veterinary formation” in the following disciplines:
Scientific research activity of the department

Under the guidance of Professor M.D. Nogoibaev in the last 36 years, the staff of the department has been working on the implementation of the following scientific problems:

For the period from 1935 to 2022, the staff of the department wrote and published more than 3600 scientific works, including 15 scientific monographs, 8 textbooks for higher educational institutions, received more than 20 copyright certificates for inventions.

The staff of the department developed and introduced into production new effective medical preparations “Ketgib”, “Ketgib-1” and “Ketgib-2” from adoptogenic therapeutic agents using local resources, various diagnostics, such as “REDK”, as well as effective methods and treatment regimens for various internal pathologies of animals. For this, we received several patents and copyright certificates of the Kyrgyz Republic.

Employees of the department with farms, veterinary clinics, pharmacies and organizations

The department has a close connection with the production on the basis of contracts and agreements for the conduct of laboratory and practical classes and scientific research. Such farms include the Peasant Farm “Chabrets”, the Peasant Farm “Vetka”, the Peasant Farm “Bulls kg”, LLC “MISS SUT”, the KNAU educational farm, many veterinary pharmacies and veterinary clinics in Bishkek, in addition, closely cooperates with the Center for the registration and certification of veterinary medicinal products, feed and feed additives.

The composition of the department 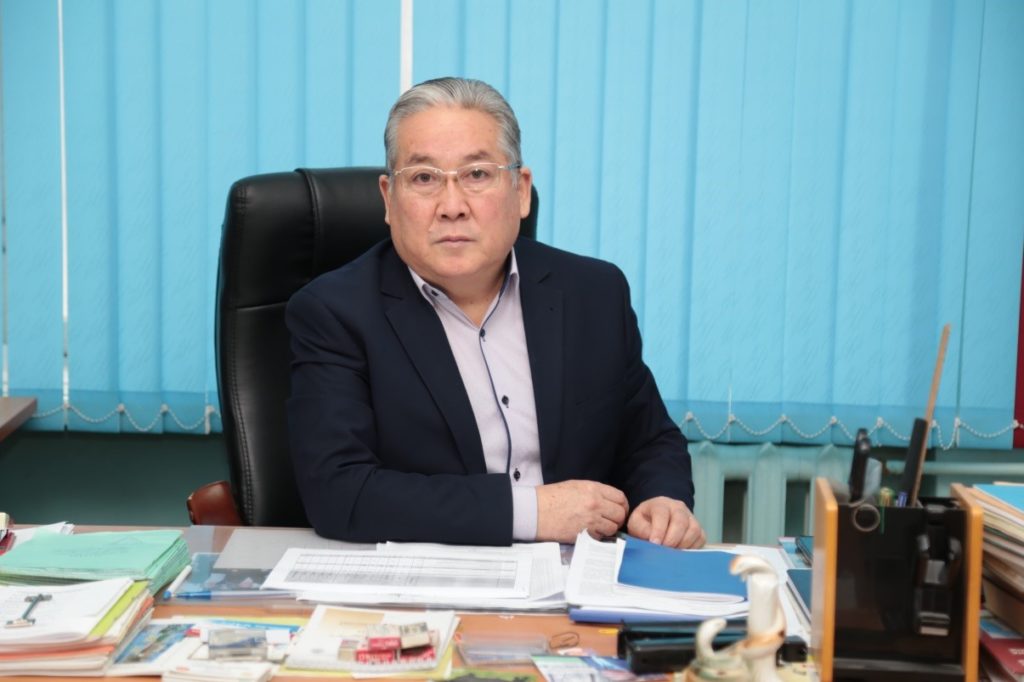 GENERAL INFORMATION ABOUT MYSELF:
Born in: Issyk-Kul region, Issyk-Kul district, village
Dolinka. Born in 1965.I live at the address: Bishkek city,

Knowledge of languages: Kyrgyz, Russian, English (with a dictionary)
Skills: I can apply knowledge and experience in accordance with the experience and use of
current job responsibilities
PROFESSIONAL SKILLS AND KNOWLEDGE: Windows, MS Office, Internet – active user
Contact address: 0700-43-05-65
E-mail: kamill1965@mail.ru

From 1986 to 1987, an assistant at the Kyrgyz Agricultural Institute

From 1987 to 1990, chairman of the trade union committee of the Kyrgyz Agricultural Institute

From 1990 to 1993, associate professor at the Kyrgyz Agricultural Institute

From 1990 to 1999, the head of the department, the incumbent of the duties of a professor at the Kyrgyz Agricultural Institute

From 1999 to 2001 head of the department, professor of the Kyrgyz Agrarian Academy

From 2001 to 2008 head of the department, professor of the Kyrgyz Agrarian University

Number of published works: 300 scientific papers, 60 textbooks (brochures), 5 scientific monographs, 6 textbooks for university students with the stamp of the Ministry of Education and Science of the Kyrgyz Republic, 1 veterinary reference, 6 copyright certificates.

Position and place of work: Senior Lecturer of the Department of Internal Diseases, Faculty of VM and B KNAU named after. K.I. Scriabin.

1982-1986 . Deputy of the district council of Pervomaisky district. с. Frunze.1982-1989. Assessor of the judge of the Pervomaisky district. с. Frunze.1970-1980. Deputy Secretary of the Party Bureau of the Veterinary Faculty. 1976-1978. Graduated from the University of Marxism and Leninism.1974-1980 . Deputy Chairman of the Trade Union of the Institute.1960. Delegate of the Plenum Kirg. Central Committee of the Komsomol in Frunze1961. Delegate to the 1st Congress of the Intelligentsia.1962-1964. Delegate of the Central Committee of the Komsomol, member of the Revolutionary Committee, Moscow.1960-1992 . Member of the CPSU.1961-1963. Deputy chief veterinarian of the state farm “Tamchy” Issyk-Kul district.1963-1965 г. laboratory assistant at the Institute of Experimental Medicine of the Academy of Sciences of the USSR, Leningrad.1965-1967. Assistant of Medical Chemistry, Kyrgyz MA.1967-1986. Assistant of the Department of Pharmacology-Pathphysiology of the Kyrgyz Agricultural Institute.

Since 1986 She has been working as a senior lecturer departments Internal Diseases of Animals KNAU named after K.I. Scriabin.

2005 Computer course of the first degree of ITI KNAU.

Skills: ability to work in a team, organizational skills, reporting.

1. Influence of macro- and microelements and heavy metals on the development
of biogeocenotic pathologies in cattle.
2. Diagnosis, treatment and prevention of biogeocenotic pathologies in animals
3. Changes in the biotic cycle of substances and their impact on animal health.
4. Immune deficiencies in calves in conditions of ecological trouble in the Chui
region.
5. Innovative Scientific and Educational Center for Protection Health of Human
and Animals in Сhuy region of Kyrgyzstan
6. Change of The Biotic Cycle of Substances and their Influence on The Health
of Animals.
7. Biogeocenotic pathologies in cows associated with abnormal levels of certain
macro- and microelements in soil, water, plants and blood.
8. Indicators of the general resistance of the body in mother cows and newborn
calves under experimental conditions.
9. Morphobiochemical and immune parameters of blood of cows’ and their calves
in environmental probliems.
Languages: Kyrgyz – fluent,
Russian – fluent
English – medium.
Skills: Adaptability, Confidence, Communication, Imagination, Leadership,
Organization, Innovation, Career Engagement, Technology Understanding,
Engagement.
Contact address: 0708 72-38-51.
Email: z-sagyndykov@mail.ru.